[Close]
Courier advisory: Australia's freight network has been majorly hampered by COVID resulting in deliveries taking an additional 3 to 5 days to complete on average.

What you need to know about 4G

Before purchasing a SIM, modem, antenna, cables, etc it's important to understand the differences that separates 4G LTE from other networks.

4G is a (Fourth Generation) high speed data service that uses the LTE radio standard to operate on mobile phone technology. It's critical to understand that 4G is an internet (packet) service, and is not currently used to make or receive phone calls. This means that even in 4G areas your mobile phone will connect to a 3G tower to make a phone call.

All three major network operators in Australia provide 4G networks. Telstra currently has the largest network with 4G being available in all metro areas, including over 300 regional towns across Australia. Optus is heavily investing in their 4G network and is fast closing the gap, with plans to cover over 200 regional towns by early 2015. Vodafone is working hard on their network, but at the moment is only available in select areas in capital cities.

Just like Telstra, Optus too have begun the rollout of their 700 and 2600 MHz LTE networks, providing more coverage with faster average and peak data rates. Both networks aim for 90% population coverage. The network gets a little confusing with Optus also operating a 2300 MHz 4G service in urban areas for greater capacity. As such it's often best to select an antenna that can operate on all frequencies.

Not having purchased any 700 MHz spectrum, Vodafone have instead decided to convert their existing 850 MHz 3G network into a 4G network instead to compete with the new Telstra and Optus long range networks. This network runs in parallel with their existing 1800 MHz 4G network, and reportedly covers over 22 million Australians.

What's so great about the new frequency bands?

With so many changes to 4G in Australia, it's an exciting time to jump on board a 4G network. The 700 MHz network is an absolute game changer - one of the major drawbacks with the older 1800 MHz 4G network has been its high carrier frequency doesn't travel particularly far and doesn't penetrate well indoors. 700 MHz on the other hand having such a low frequency travels significantly further, bends around and behind hills, and penetrates much easier inside buildings, providing coverage similar to Telstra Next-G - meaning high speed data will now be available as far as you can make a phone call (in switched-on areas). Several field tests conducted by Telco have demonstrated some locations without phone coverage have been able to achieve over 80 Mbps using a high gain panel antenna.

There's not a lot of publicity about the new 2600 MHz 4G network, but despite having a very short range it's important to help reduce congestion in densely populated areas such as city centres where the operation of a long range transmitter would have considerable self interference (due to the long reuse distance required).

Concepts such as MIMO, antenna type, and selection will be discussed further in the relevant product categories below.

What is Carrier Aggregation?

Yes, the word carrier is in the name, but it has nothing to do with combining Optus + Telstra "carriers" which should actually be referred to as mobile network operators (MNO).  The word carrier refers to the carrier frequency of each of the combined the network frequency bands used to transport the modulated data to and from your device. 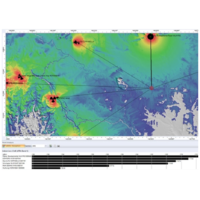